U.S. President Donald Trump once again unloaded on Amazon.com Inc., tweeting that the company is hurting other retailers and implying that it’s killing industry jobs across the U.S.

“Towns, cities and states throughout the U.S. are being hurt – many jobs being lost!” Trump said in the tweet.

Amazon is doing great damage to tax paying retailers. Towns, cities and states throughout the U.S. are being hurt – many jobs being lost!

Trump’s reference to “great damage” echoes chatter in Washington and academic circles that Amazon and other technology companies may have become too big and powerful. Apple Inc. Alphabet Inc., Microsoft Corp., Facebook Inc. and Amazon are the biggest companies in the world by market cap and dominate many facets of everyday life. Some critics have even suggested that they should be broken up.

During the presidential campaign, Trump claimed Amazon was a monopoly that he would go after for antitrust violations if he were elected. Amazon takes about 70 percent of all e-book sales and 30 percent of all U.S. e-commerce. “Believe me, if I become president, do they have problems. They’re going to have such problems,” Trump said in February 2016. In the U.S. it isn’t illegal to have a large market share.

In June, Amazon agreed to buy Whole Foods Market Inc. Experts and analysts have largely dismissed antitrust threats for the world’s largest online retailer, though a U.S. lawmaker has called for hearings on the proposed deal to consider its ramifications for shoppers and workers. 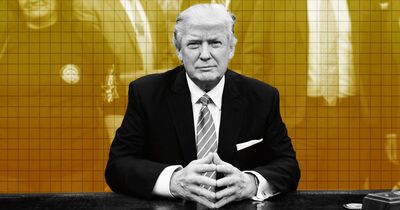 While it’s unclear what prompted Trump’s tweet, The Washington Post ran a scathing editorial about Trump in the paper Wednesday, and there were also pro-tax reform advertisements that ran on early morning talk shows. Amazon’s shares fell less than 1 percent to $975.19 at 10:18 a.m. in New York.

Trump’s tweet about jobs lands amid one of the most tumultuous years in the industry’s history. Brick-and-mortar chains, especially apparel sellers, are suffering from sluggish mall traffic and an exodus of shoppers to e-commerce.

Exclusive insights on technology around the world.

Get Fully Charged, from Bloomberg Technology.

A rash of chains have filed for bankruptcy this year, including Payless Inc., Gymboree and HHGregg Inc. and RadioShack. And the biggest department-store companies, such as Macy’s Inc., Sears Holdings Corp. and J.C. Penney Co., are shuttering hundreds of locations. The total number of store closings is expected to hit a record in the U.S. this year, with Credit Suisse Group AG analyst Christian Buss estimating that the number could exceed 8,000.

On the other hand, Amazon is hiring rapidly. The online behemoth has pledged to hire more than 100,000 workers by 2018 and has been holding job fairs all over the U.S. In some cases, fired department store workers are ending up at Amazon fulfillment centers. 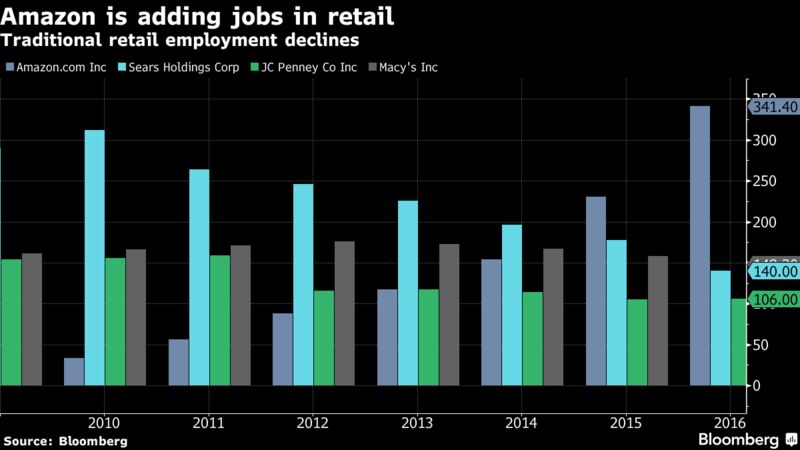 In his tweet, Trump also hammered Amazon again on tax-related allegations. It’s unclear exactly what he means since the company now collects sales tax in each state that has one. There is one loophole left: Shoppers don’t have to pay sales tax when they buy from one of Amazon’s many third-party vendors. Such sales make up about half of the company’s volume.

Trump’s relationship with Corporate America has frayed since his inauguration and several company executives resigned this week from a business council to protest the president’s response to the violent demonstrations in Charlottesville, Virginia.

But Trump has often taken particular aim at Amazon and the Washington Post, owned by Amazon founder Jeff Bezos, for its coverage. In June, the president posted a tweet attacking “AmazonWashingtonPost, sometimes referred to as the guardian of Amazon not paying internet taxes.”

In December 2015, Trump also described the Washington Post as a tax shelter that Bezos uses to keep Amazon’s taxes low. Without these arrangements, Trump argued, Amazon’s stock would “crumble like a paper bag.” Bezos actually owns the Washington Post via a holding company separate from Amazon. Amazon did not respond to a request for comment.

For more on Amazon, check out our tech podcast Decrypted:

Amazon has been battling a number of politicians from both the U.S. and Europe about its stance on tax. In the U.S., Amazon previously fought to only collect sales taxes for purchases in states where it doesn’t have a physical presence. Now it has a legion of distribution centers and collects sales tax in every state that has one.

The U.S. retailer is currently fighting the European Union over its tax bill, while in March it won a $1.5 billion tax dispute with the IRS.

— With assistance by Nick Turner